The Via Francigena: history, stages and how to prepare

The Via Francigena: history, stages and how to prepare for it

One of the most magical aspects of a pilgrimage is that, while walking a path or a historic route, you are walking on the same land that many other people walked on hundreds of years ago. However much the world may have changed, it is fascinating to think how the paths travelled by man have remained the same and how routes are not only a connection between two places, but also a way of connecting different eras and cultures.
The Via Francigena, in this sense, fully represents the concept of connection, because for over 1000 years it has not only made it possible to connect important European cities, but also to bring together people from different backgrounds, to appreciate priceless cultural wonders or to discover unknown places from other eras. In this way, each pilgrim is connected to others who are travelling the same route, and also connected in a spiritual way to those who have walked the path before them and those who will walk it after them.

If you are planning a trip to Italy and you are passionate about pilgrim paths, then in this article you will discover everything you need to know about the Via Francigena: its origins, the characteristics of the route, the best stages, and how to prepare for it. 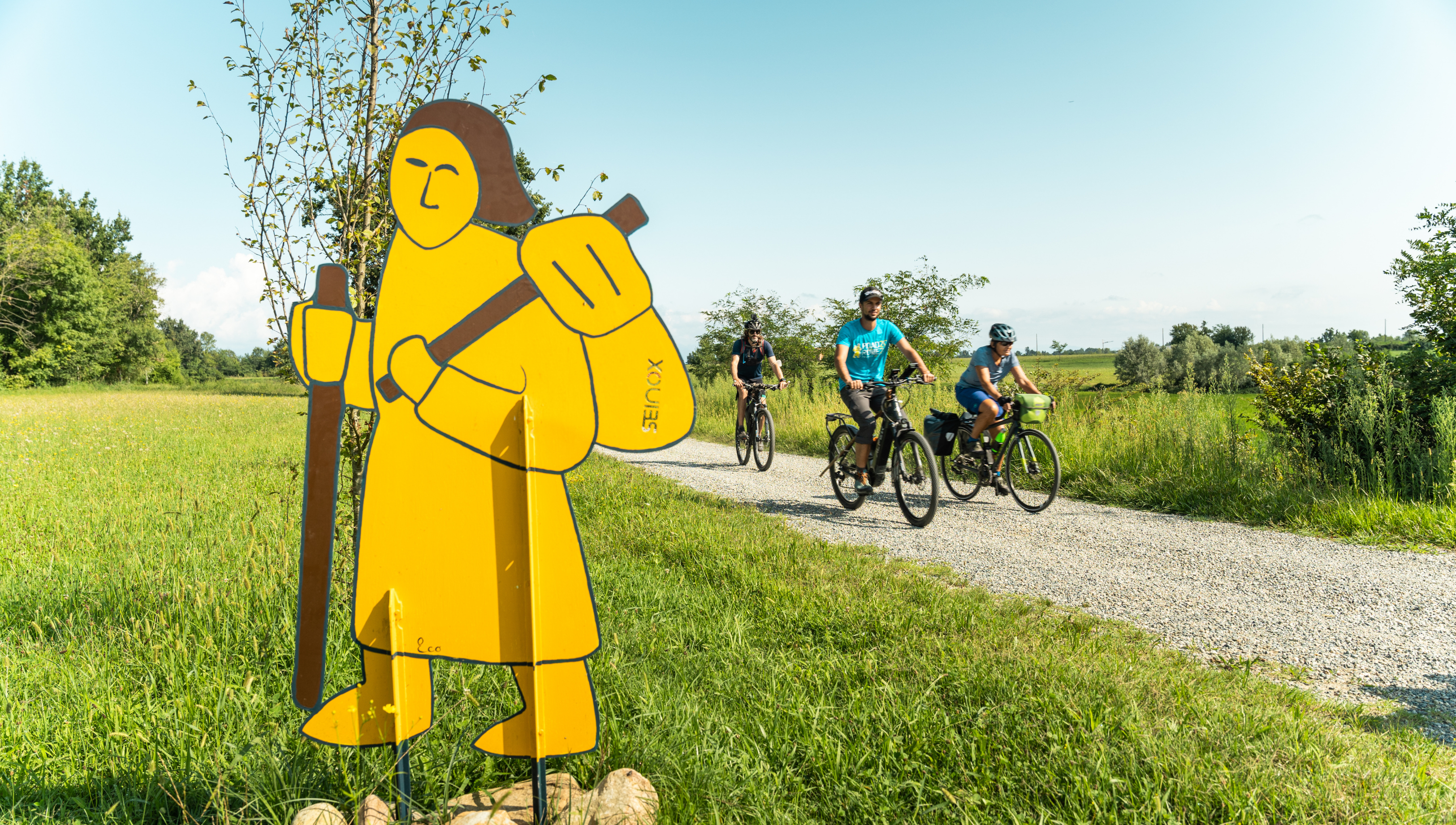 What is the Via Francigena and its origins

The Via Francigena is an ancient communication route linking the French territory with Rome, whose origin dates back to the early Middle Ages. The name Via Francigena literally means "road originating from France" and was first used after the fall of the Lombard kingdom to Charlemagne's Franks. Despite its name, this road developed in its final stretch as early as the 7th century and was used by the Lombards to connect the Kingdom of Pavia to the southern duchies while avoiding the areas belonging to the Byzantine Empire.

The Frankish territories at the time of Charlemagne were very extensive and included the Rhine valley and the present-day Netherlands. In this context, the Via Francigena emerged as an important link between Western Europe and Rome and developed into several paths from different cities and regions. There were also natural, political or security reasons for the multiplication of the paths, so that a route could be altered due to landslides, floods, taxes, epidemics or the presence of brigands. For this reason, when we speak of the Via Francigena today, we must be aware that we are referring to a bundle of routes and "road areas" rather than to a single itinerary.

Among the itineraries along which the Via Francigena develops, however, the most famous is certainly the one described by Archbishop Sigeric. In 990, on the occasion of his investiture, he travelled the route from Canterbury (England) to Rome (Italy), noting all the stages of his journey in a diary, now preserved in the British Museum in London.

Moved by faith and attracted by the religious importance of the city of Rome, many pilgrims decided in the following years to follow in Sigeric's footsteps and began to populate the Via Francigena in order to reach the Pope and the tomb of St Peter. Many even went beyond the Eternal City, as far as Santa Maria di Leuca (Apulia), to embark for the Holy Land as pilgrims or as fighters for the faith.

But the importance of the Via Francigena is not only linked to the religious aspect. It was also used by merchants, who could bring their goods to the different cities, or by armies, who were strategically moved on the orders of sovereigns.

In modern times and with the development of roads, the Via Francigena progressively lost its importance, only to be rediscovered in the 1980s. In 1994, this route was certified as a 'Cultural Route of the Council of Europe' and since 2001 it has undergone a process of enhancement thanks to the European Association Vie Francigene (AEVF). Today, this itinerary is an extraordinary example of slow and green tourism and is travelled every year by thousands of pilgrims driven by the desire for recreation, the need to find themselves or, as in the past, by faith.

Via Francigena: the path and the itinerary

The official itinerary of the Via Francigena starts from the Cathedral of Canterbury, England, in the city of Sigeric. After reaching the port of Dover and crossing the English Channel, the journey is resumed on the mainland, specifically from Calais, France. The Via Francigena then crosses the eastern part of France and enters Switzerland along Lake Geneva. The route then continues into Italy, crossing the Great St. Bernard Pass and descending along the Po Valley, where it encounters some important historical centers such as Pavia, the ancient capital of the Longobard Kingdom. After crossing the Apennines through the Cisa Pass, the route then crosses Tuscany via Lucca and Siena, before heading towards Rome, the most important stage.

In its most famous variant, the Via Francigena does not stop in the Eternal City but continues southwards, crosses the Apennines again and descends along the Apulian coast to its final destination: Santa Maria di Leuca.

The whole itinerary is over 3000 km long, touches 5 different countries and is divided into about 150 stages of between 20 and 30 km each. For those who undertake the Via Francigena on foot, it is advisable to cover one stage per day, while those who travel by bicycle can cover three stages per day.

On this long journey, pilgrims can admire beautiful landscapes, from the cliffs of Dover to the Champagne hills near Reims, from the shores of Lake Geneva to Tuscany. The itinerary also touches on picturesque villages, such as Mouthier-Haute-Pierre, Besançon, San Giminiano and Siena, and allows you to visit places of inestimable historical and cultural value, such as Renaissance cathedrals, Romanesque monasteries and impressive archaeological sites. 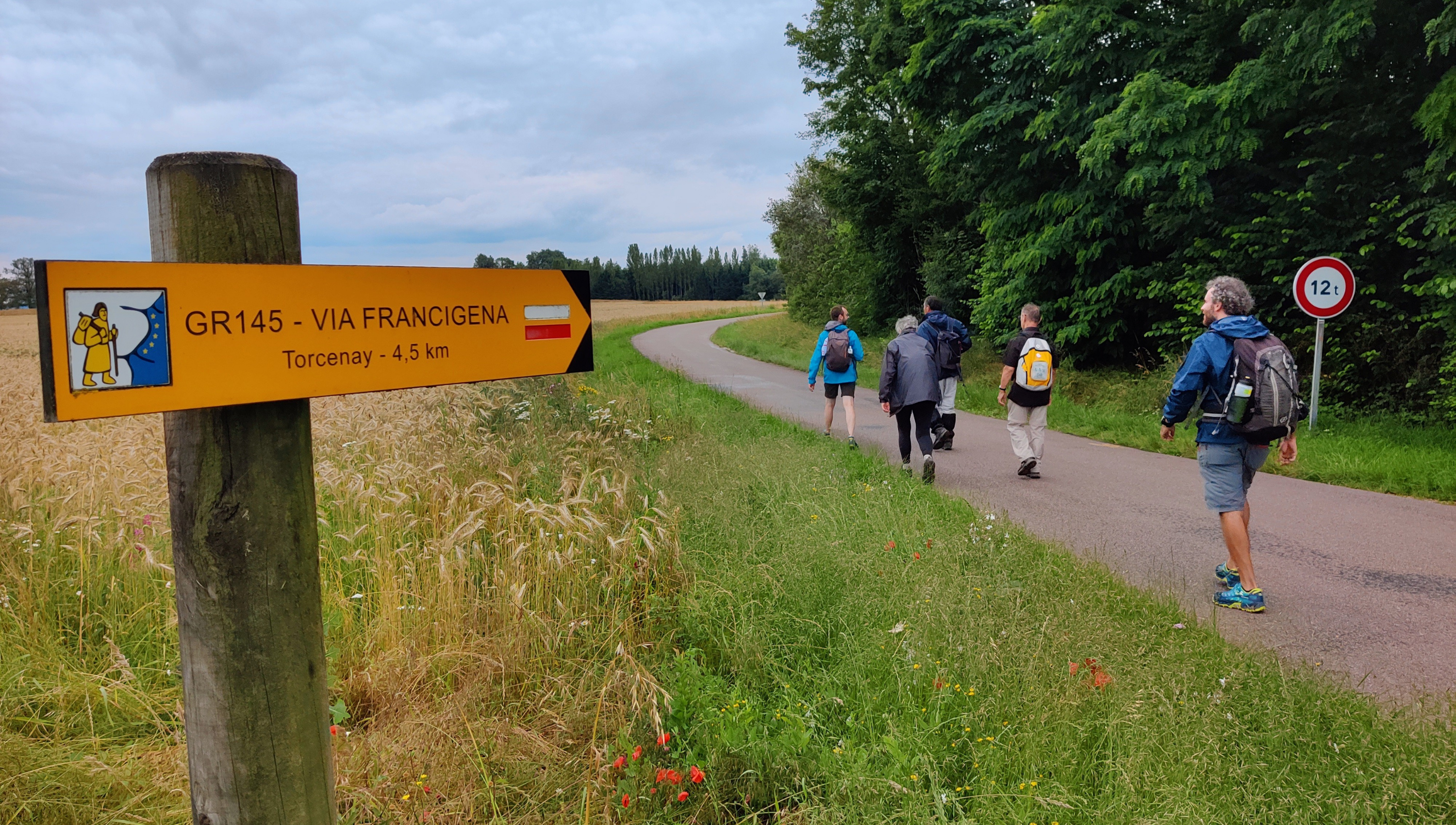 Via Francigena: the stages in Italy

The Italian section of the Via Francigena is perhaps the most beautiful part of the entire itinerary and crosses the peninsula from north to south along mountain paths, mule tracks, country roads and ancient Roman pavements. There are about 90 stages in Italy, from Valle d'Aosta to Puglia, where you can admire indescribable natural landscapes, mountain passes, lakes, forests, rice fields and vineyards.

Among the best stages of the Italian section are the following:

Via Francigena: the stages in France

The French stage of the Via Francigena is very charming and crosses the eastern part of the country in 47 stages, from the Pas de Calais to the Doubs, and allows you to admire indescribable natural landscapes passing through forests and vineyards.

Among the best stages of the French section are the following:

Hiking the Via Francigena: how to prepare yourself

The Via Francigena is not simply a hike, but a real pilgrim trail, so it is necessary to be prepared before starting it. It is essential to establish in advance the route and the stages to be followed, to prepare your rucksack correctly and to be informed about the functioning of Credentials and Testimonium, two fundamental documents for pilgrims.

How to organise and choose your route

The Via Francigena is a well-marked itinerary but, despite this, it is always a good idea to set off knowing the route to be followed. If you decide to undertake several stages, you should already have an idea of where to stay overnight and organise your time and equipment accordingly, so as not to find yourself unprepared and without accommodation for the night.

It is a good idea to have an official guidebook with maps and useful information about each stage. It may also be useful to download the App of the Via Francigena, which contains all the GPS tracks pre-loaded, which are also available offline in case of poor satellite coverage. With regard to trekking apps, we have published the article "The best hiking apps", which can be useful if you want to learn more about this topic.

What to put in your rucksack

On the official AEVF website you can consult and download the list of items that you should take with you on a pilgrim trail. The difficult part of composing a backpack for a pilgrim road is surely the choice of how many items to put in it, because the less things you take with you on a journey, the less weight you have to carry during the hike. The ideal weight of the rucksack, without taking water into account, should be no more than 10% of your body weight, so you should try to carry only the bare essentials. The list of recommended equipment includes both long and short pants, breathable technical T-shirts, synthetic underwear, hiking socks and a towel.

For those who choose to walk in summer, sunscreen, sunglasses, and a hat are recommended. Additionally, it is always a good idea to carry at least one water bottle to fill up during the walk.

Finally, it is advisable to carry a first aid kit in your rucksack to deal with any unforeseen events. You can read what to pack in the kit in our article "First aid kit for trekking and hiking: contents and recommendations".

In order to officially walk the Via Francigena, it is necessary to have a Credential, or "Pilgrim's passport", a document which is stamped at each stage, and which can be requested in tourist offices, parishes or accommodation facilities. In addition to this symbolic function, the Credential also allows access with special facilities.

The Testimonium, on the other hand, is a document that certifies that the pilgrimage has taken place and is only issued to pilgrims in possession of a stamped Credential who have walked the last 100km or cycled the last 200km. Concluding the itinerary in Rome, you can request the Testimonium at the Offices of the Sacristy of St Peter's Basilica or at the office of Opera Romana Pellegrinaggi. If you conclude the Via Francigena in Santa Maria di Leuca it is necessary to go to the Basilica-Sanctuary of S. Maria De Finibus Terrae.

The Light Hiking line: footwear for all pilgrims' needs

Thanks to our partnership with the European Association of Vie Francigene, we have been able to study the topic of pilgrim trails in depth, and the specific needs of pilgrims.

For all those who want to travel, even for just a few stages, we recommend the shoes in our "Light Hiking" line, designed to offer lightness and maximum comfort while walking, even with heavy rucksacks.